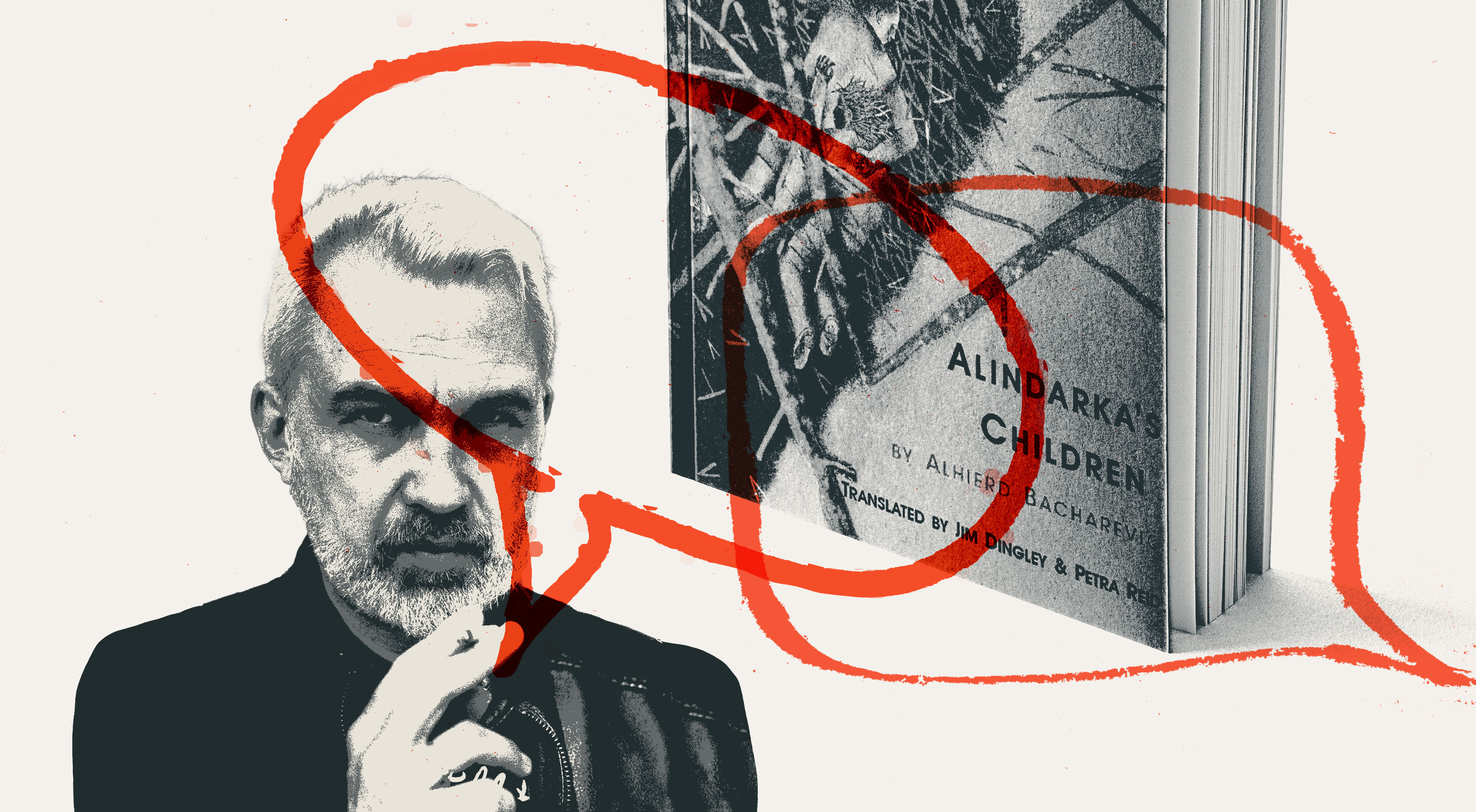 On the publication of ‘Alindarka’s Children,’ Alhierd Bacharevič explains his process and how necessary the English/Scots translation by Jim Dingley and Petra Red has been.

This is going to be a rather long story.

It just so happens that I am writing these lines in a really beautiful autumn, in my home town, where peaceful people are being kidnapped, beaten, tortured and pursued, in the country called Belarus, which now finds itself ruled by a military-police junta. Yesterday evening, not far from the apartment where I live, you could hear guns and explosions. Beside me is a smartphone which I look at closely every five minutes. And I have no idea how to explain to anyone living outside Belarus what is going on and what we really feel. All of this in fact started many years ago. Then came 2020, the year when everything at last became obvious to everyone, in Belarus and in the whole world.

It was right at the beginning of 2007 that I left Belarus; life here had become dangerous and stifling. Then in 2013 I returned. Love brought me back. That’s how it was. Once back home I wrote the novel Alindarka’s Children. I well remember what gave me the necessary push to start work. I had read that somewhere in some little town a woman in the local education authority had advised the parents of a little child to “urgently seek the help of a speech therapist. Because your kid has a strong Belarusian accent. Get it cured, before it’s too late. Know what I mean? Normal kids speak proper, they speak Russian, got it?”

I was always well aware of what I had fled from and what I had come back to.

And that’s how the tale of Alicia and Avi came to be written. Belarusian speaking children who land up in a concentration camp, where there’s a kind Doctor who treats them for speaking the wrong language. A tale of Father, a Nationalist, who makes his daughter bear the responsibility for carrying out a Great Mission – preserving Belarusian. Father, who forbids Alicia to speak and think in Russian.

Father kidnaps his children from the Camp. The children flee and wander around the Huge, Mysterious Belarusian Forest…

Alindarka’s Children. A fairy tale for adults. A novel about the Demons that dwell within all Belarusians who know who they are. A tale that turned out to be complex and terrifying… And that’s how it reads today!

My thanks go to the ‘Halijafy’ publishing house and Źmicier Višnioǔ for producing such a handsome book; its appearance is enhanced by the cover that the artist Kaciaryna Dubovik designed. I also owe a debt of gratitude to the editor Siarhiej Šupa.

In 2015 the novel received the ‘Book of the Year’ prize, and came third in the Giedroyc Prize competition. Three years later the novel appeared in a French translation by Alena Lapatniova, published by Le ver à soie in Paris (thanks to Virginie Symaniec). Now it has come out in an English translation in Great Britain, or, to be exact, Great Scotland; the publisher is the Scotland Street Press of Edinburgh.

Alindarka’s Children has become a literary castle; its walls, towers and corridors have been designed by Jim Dingley and Petra Reid with all the skills of true poets who know literature, It is a book in which all the allusions, both large and small, all the subtleties, the games and the linguistic apparatus have been considered, weighed up and transmitted in such a way that pernickety, demanding anglophone readers can make up their own minds, and for this I thank them.

The book has Kaciaryna Dubovik’s original Belarusian cover, in a fine translation by Jim Dingley and Petra Reid. It has to be said, though, that this is not just a translation of a Belarusian text into English. Firstly, it is a translation into English and Scots (and that’s a language I’m sure you all know about). It’s a huge piece of work. Alindarka’s Children has become a literary castle; its walls, towers and corridors have been designed by Jim Dingley and Petra Reid with all the skills of true poets who know literature, It is a book in which all the allusions, both large and small, all the subtleties, the games and the linguistic apparatus have been considered, weighed up and transmitted in such a way that pernickety, demanding anglophone readers can make up their own minds, and for this I thank them.

The book will be officially launched at the end of this month, but it has already been printed (see the photographs), and the first review appeared on 23 September – in The Scotsman, no less. To be perfectly honest, I cannot imagine what anglophone readers will make of Alindarka’s Children. A sceptic will say “not very much”. What else could you expect? I have, after all, always written for the Chosen Ones.

And I also need to thank Tania Skarynkina. She it was, who, two years ago in Scotland, talked about my mad, unhappy ‘Children’. Tanya is a good talker. I’ve always known that.

The news of the book’s publication will have to suffice for today. I have not yet held the actual book in my hands. How long does it take for a book to travel from Scotland to Belarus.

On this occasion, perhaps, a whole lifetime.

On the publication of ‘Alindarka’s Children,’ Alhierd Bacharevič explains his process and how necessary the English/Scots translation by Jim Dingley and Petra Red has been.